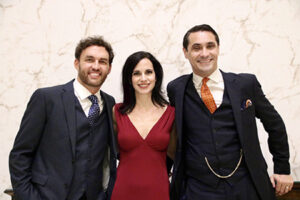 Empire Trio, formerly known as O Sole Trio, have come together to create a brand-new show, Hooray for Hollywood. Enjoy an evening full of the most beloved songs from the world of film at Bryan Arts and Education Auditorium, 120 South Beech Street, Bryan, Ohio on Tuesday, September 13, 2022 at 7:30 p.m.  Individual tickets for this performance will be available at the door for open seating at $30 (adult) and $5 (student). Doors open at 6:45 p.m.

Several years ago, three musicians came together to create a musical explosion, resulting in the creation of Empire Trio (formerly known as O Sole Trio). Empire Trio quickly established themselves as a musical force, selling out major venues such as Carnegie Hall, Lincoln Center for the Performing Arts, and over 300 other venues all over the United States, Canada, and the UK. O Sole Trio features the lush and mesmerizing voices of soprano Erin Shields, and baritone Michael Kelly, as well as the versatile and virtuosic David Shenton on piano and violin, the world’s first (and possibly only) musician to play violin and piano simultaneously. Their hit show Hooray for Hollywood features beloved music from the film industry, including hits from Casablanca, James Bond, Titanic, The Wizard of Oz, and more!

Intricate harmonies, a dash of Rat Pack-style comedy, and it’s clear
to audiences why The Black Market Trust has quickly earned the
reputation as one of the premier live acts performing in music today.
They have traveled the globe recording and performing songs from
the Great American Songbook. A cohesive stylish sound.

We are back and ready for the 2021-2022 Season! Click the link in the menu to see the shows coming to the Bryan stage this season.

Since we had to cancel our 2020-2021 concert series due to pandemic restrictions, we are pleased to announce we are now in the process of planning a brand new concert series for the 2021-2022 concert season. The Board, through Live On Stage, is currently previewing potential performing artists who would appeal to our subscribers. More information regarding artists and concert dates will be forthcoming in the spring of 2021. A membership campaign would then be held in late spring or early summer. At the earliest, the new season would begin in the fall of 2021. Stay tuned.
We were pleased to receive a grant from the Ohio Arts Council this past spring. Those proceeds helped fund our Shades of Buble concert this past March. The Ohio Arts Council plays a vital role in sponsoring and promoting arts programs within the state.